Here’s an abstract of a project I’m working on:

Can God Be Cute? Precious Moments Figurines and

Cuteness as the Darkness of the Divine

A retro-futuristic re-reading of Rudolph Otto’s 1917 theological tract The Idea of the Holy may shed light on religious practices that consume commodity culture kitsch as acts of devotion. According to Otto, the holy is the “numinous”—that which is both terrifying and fascinating at the same time. Although the numinous is an experience, its object lies beyond the rational and the sensible; through it, Otto attempts to describe the human approach to the unknowable reality of the divine. While religion and consumerism share a long history of devotional practices trafficked through icons and relics (among other goods), their intersection through the more recent phenomena of modern mass-production and consumer culture has culminated in the cute object of divine adoration. Examples exist cross-culturally (see the photos of cute Buddhist monk devotional figurines at the end of this abstract, as well as examples of the figurines discussed below). Christian-themed Precious Moments figurines, dolls, and illustrations (such as those that appear in a special children’s Precious Moments Bible) signify buyers’ adoration of the divine though their adoration of cute, smiling but weepy-faced, (mostly) white children with strange, teardrop-shaped eyes. Interestingly, even though “Jesus Loves Me” (in loopy cursive script reminiscent of sweet decorative frosting) is a common motif adorning crosses and picture frames, Jesus himself never appears as a teardrop-shape-eyed figure. Other Biblical characters, such as Mary, Joseph, Abraham, Isaac, and Moses (sweetly smiling as he holds up two tablets inscribed with the Ten Commandments), are offered as porcelain figurines or illustrations; and the baby Jesus likewise appears in nativity scenes with three childlike kings and tear-eyed sheep at the manger. 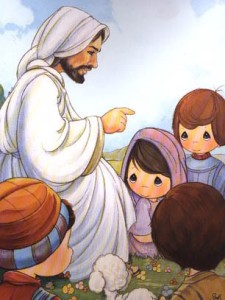 But the adult Jesus only appears as an adult. It would seem, then, that for all the over-signification of adoration through adorableness, the Precious Moments aesthetic fails right at the place where it promises to bring consumers closer to God: when seeking the actual face of Jesus. Why is this? In the Orthodox traditions of icon-writing and gazing, the face of Jesus and the saints are explicitly represented as human figures but understood as conduits, although through darkened corridors, to union with the divine. Theologically speaking, contemporary cuteness in devotional Christian kitsch is a kind of collapse of that corridor for which the Orthodox icon serves as entrance. Instead of the Precious Moments figure signifying an entrance to a process, it is a signal of a religious identity that has been achieved and proclaimed. If an Orthodox icon is an invitation into divine unknowing, the Precious Moments figurine is an assertion of knowledge. And yet, as “cute” objects, there is still something aggressive about their helplessness (recalling Ngai’s discussion of Murakami’s art in “The Cuteness of the Avant-garde”) that brings to mind Otto’s insistence on the holy combination of terror and fascination that leads to the experience of epistemic failure. The cuteness of devotional kitsch is therefore a kind of collapse of knowledge as well, or a negative epistemology. The over-signification of the adorable leads only to the impossibility of adoration when its aesthetic cannot represent and cannot comprehend the holy; its cuteness is numinousness. If we retro-futuristically look backwards through this history of object-oriented devotion, could we also consider that such a collapse of knowledge into the darkness of the divine as critique of doxological assuredness is also kind of “cute”? I propose that Precious Moments figurines complexify the shining of “this little light of mine,” their cuteness also offering an entrance into the darkness of apophatic unknowing. 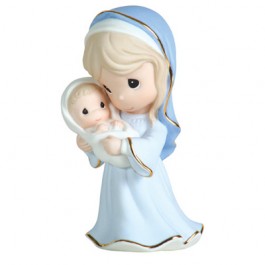 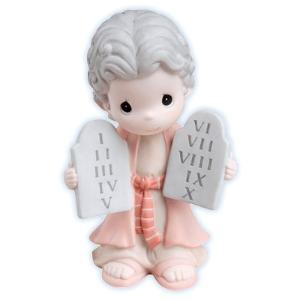 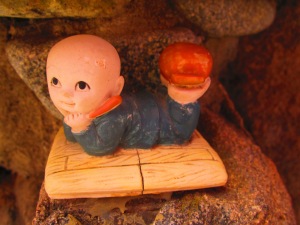